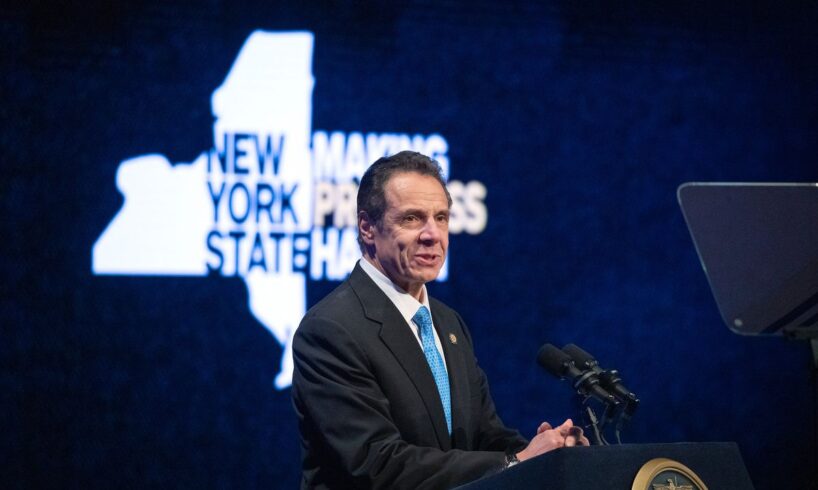 Governor Andrew Cuomo renewed his call to “close funding gaps between rich and poor schools” during his State of the State speech on Wednesday — once again singling out funding disparities as a central education issue.

In an 80-minute speech that devoted less than a minute to K-12 education, one of the state’s largest budget items, Cuomo said, “It is shameful that we do not distribute the funding in the most progressive way.”

“Fund the poorer schools and close the education gap and let’s do it this year!” he thundered to applause from the audience.

Cuomo has repeatedly argued that districts around the state don’t properly fund schools with large numbers of low-income students, and has suggested the state should approve local district budgets and even establish a new funding formula to direct money to needy schools. Neither of those proposals have been implemented, though Cuomo did win a provision to require more transparency regarding school-level budgets.

Officials said Wednesday he would seek to “require” that state education funding go to the neediest schools, though they did not immediately provide details about how that would work.

It’s not clear what effect such a proposal would have on New York City, which educates close to half of the state’s students and allocates additional money to schools that have more students who are poor, struggling academically, have a disability, or are learning English.

One analysis conducted by the advocacy group Education Trust found that higher-need schools get between 15% and 22% more funding than schools serving lower-need students, though the organization argues this is still not enough to overcome disparities at those schools.Become a Chalkbeat sponsor

“Governor Cuomo’s focus on this issue could help improve educational equity within that broader context, and we look forward to learning more details,” Ian Rosenblum, the group’s executive director, said in a statement.

But other education advocates said Cuomo’s emphasis on disparities was mostly rhetoric. Instead of reallocating existing funding, the governor should invest more money through “foundation aid,” a formula that directs money to the state’s highest-need school districts. The formula was created in response to a school-funding lawsuit that was settled more than a decade ago, but advocates and policymakers contend has never been fully funded.

“If the Governor really cares about finally achieving equity he would join his colleagues in the Assembly and Senate to support a multi-year commitment to phase-in the $3.8 billion in Foundation Aid owed to public schools,” the advocacy group Alliance for Quality Education said in a statement. “Governor Cuomo has been the biggest obstacle to funding the formula.”

Unlike previous years, Cuomo did not release his budget proposal at the same time as his State of the State address. Details about how much money he will propose for schools across the state won’t be available until later this month.

Still, documents released by Cuomo’s office on Wednesday emphasized that education spending has increased roughly 43% on his watch and that New York spends more per student than any other state — a potential sign that his funding proposal may be more modest. The state also faces a yawning $6.1 billion budget deficit.

In their opening budget proposal, the New York Board of Regents urged the governor to increase education funding across the state by $2 billion, or roughly 7%. It is unlikely Cuomo will match that figure in his proposal; in recent budget cycles, funding increases have hovered closer to $1 billion.

Research has consistently shown that boosts to education funding can lead to a slew of benefits, ranging from lower dropout rates to higher graduation rates and test scores. One recent study that focused on New York schools outside New York City found that increased funding can lead to academic benefits, despite relatively high levels of funding.

The article was published at Cuomo doubles down on shifting money to needy schools, in a speech light on new education ideas.