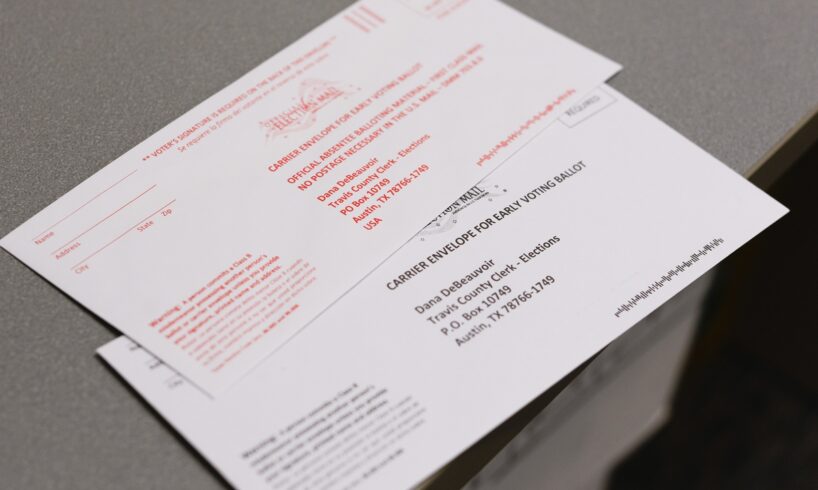 Current law says Texans can vote by mail if they’re going to be out of their home counties during early voting and on election day, if they’re in jail but eligible to vote, if they’re 65 years or older, or if they are disabled.

The state’s relatively limited vote-by-mail opportunities were a subject of partisan dispute well before the emergence of COVID-19.

Republican lawmakers and consultants have argued that mail balloting is riddled with fraud, though courts have found the evidence for that lacking and those lawmakers have not put serious effort into ending the mail-in balloting already allowed.

Democrats, on the other hand, want to follow states that have made voting by mail an option for all voters, saying it would increase turnout — and hoping that increased turnout might improve their recent history of losing statewide elections in Texas.

The pandemic threw something new into that fight — the idea that it could be dangerous to vote in the presence of a contagious disease, and that current law could be read to allow all Texans to vote absentee instead of joining the lines at the polls.

What makes a voter “disabled” isn’t clear and is at the center of the current legal disputes over who can vote by mail. If you apply for a mail ballot (here’s how), you’re asked to check one of four boxes, depending on which of the four vote-by-mail conditions you’re claiming. Those who choose disability are directed to another section asking which elections they’re applying for.

There is no place or requirement for voters to describe their disability.

State election law leaves some room for argument about that, which is one reason voting by mail is tangled up in court right now: “A qualified voter is eligible for early voting by mail if the voter has a sickness or physical condition that prevents the voter from appearing at the polling place on election day without a likelihood of needing personal assistance or of injuring the voter’s health.”

The folks suing to open voting by mail to anyone during the pandemic have argued that the threat of infection from the coronavirus in a potentially crowded voting location satisfies that definition of disability.

The Texas Tribune’s Alexa Ura has documented every step of this tangled path: A state district judge agreed with them in a suit filed by Texas Democrats. A state appellate court agreed, but the Texas Supreme Court put that on ice temporarily and heard an appeal of that ruling this week. Meanwhile, in a federal case on the same subject, a San Antonio federal judge agreed that voting by mail should be opened up, in a colorful opinion that was quickly stalled by the 5th U.S. Circuit Court of Appeals.

“Citizens should have the option to choose voting by letter carrier versus voting with disease carriers,” U.S. District Judge Fred Biery said in his order. “‘We the People’ get just about the government and political leaders we deserve, but deserve to have a safe and unfettered vote to say what we get.”

For all of that, Texas law is unchanged at the moment. State lawyers will tell you that the coronavirus is not a disability and that voters have to appear in person unless they are out of county, in jail, 65 or older, or disabled. Both the state and federal trial court judges ruled that any Texas voter can request an absentee ballot during the pandemic and check the disability box; higher courts are reconsidering both of those rulings. And the law doesn’t require you to list the reason for your disability if you apply for an absentee ballot.

This isn’t just about the November general elections. The state’s primary runoffs were pushed — another coronavirus disruption — from late May to July 14. Early voting in that election will start June 29. That will be the state’s first test of how voters react to elections during a pandemic: whether more apply for mail ballots, whether more turn out or stay home, how state and local election officials manage everything.

But runoff elections are classically low-turnout affairs. The real test will come in November — and with a presidential race atop the ballot, which typically draws the highest number of voters of any election.

Big turnouts are terrific for civic engagement. But early voting and election day crowds are problematic if social distancing is the order of the day.

The article was published at Analysis: Politics and a pandemic jumble Texas elections.