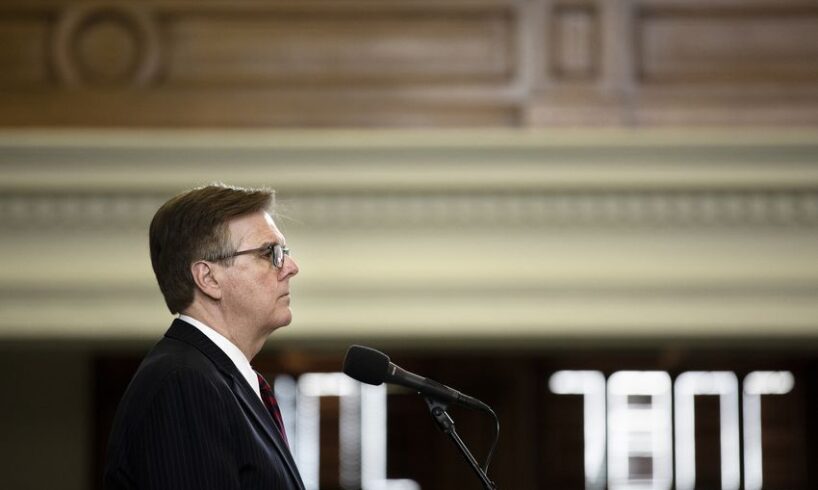 If you look at his campaign missives, it’s clear that the state’s lieutenant governor — or maybe it’s his staff — can’t reconcile his math with his politics.

Dan Patrick complains that spending in “many” cities and counties has been growing at 7% or more per year. And later on, he tries to debunk reports that the state budget went up by more than twice that amount:

“There has been a great deal of misinformation about the growth in the Texas state budget this session bolstered by early reports from the Legislative Budget Board and TPPF [the Texas Public Policy Foundation, a conservative think tank] suggesting the budget increased three or four times more than it actually did. You may have seen e-mails or articles on conservative blogs and news sites this summer that we increased spending this year 12-14%. That was just incorrect,” he wrote.

“After adjusting for almost $19 billion for Hurricane Harvey recovery, which was predominately federal funds, and nearly $6 billion in cuts for taxpayers, annual growth in the 2020-21 budget will be 2.5% — well below the conservative goal of population increase times the rate of inflation.”

Budgets always look better if you don’t include all of the money you’re spending. The bottom-line numbers are right there to see. At the end of this legislative session, the House and Senate passed, and the governor signed, a two-year budget totaling $250.6 billion. At the same time two years earlier, the final budget totaled $216.6 billion.

Patrick doesn’t want to count $26 billion of the increase, but the budget numbers are clear, and arithmetic doesn’t care about your politics. Besides, he’s still counting most of the federal spending in the current budget, which amounts to $86.4 billion.

Math battles like this one are why the continuing flap between Patrick and the Legislative Budget Board, which he co-chairs, is important.

The budget board, commonly referred to as the LBB, has 10 members — five each from the Senate and the House — with the lite guv and the speaker in charge.

It has an executive director who serves at the pleasure of the board and who runs a staff of financial whizbangs who write the state budget for the elected legislators who make the final decisions.

It’s possible for the staffers there to do things the Legislature might not want them to do; in fact, that’s what Patrick seems to believe.

And it’s probably unfair to think that the average Texas legislator has the horsepower to keep up with a $250 billion budget that gets slapped together and voted out in 20 fast weeks every two years. If you wanted to sneak something past legislators, it wouldn’t be that difficult.

On the other hand, those lawmakers aren’t squawking about it, at least not publicly. Patrick offers a general criticism about unelected liberal bureaucrats without bringing a bill of particulars. And instead of managing his way out of what he sees as a mess — he’s the co-chairman, remember — he simply cut the Senate’s funding for the LBB. That had the effect of shrinking the staff, making the House pay the freight, and ensuring that anyone with half a brain on the LBB staff knew his or her loyalty should be with the House and not with the Senate.

The hand that feeds you, right?

There have been moments, too, when the LBB wasn’t going along with the spin from the top. A set of numbers once referred to here as a “pesky little chart” was meant to show where the money for public education in Texas comes from. It showed that it was coming mostly from local property taxes and not from state funds. And it also proved that the state was effectively (and openly) taking advantage of rising property values and taxes to lower state spending on public education and using the money for other things in the budget.

That was embarrassing to some.

The Texas Education Agency had similar aims, building a chart to show where most public education spending was coming from. You see the difference? One analysis showed which taxpayers put the money up, the other showed which government ultimately spent the money. The TEA numbers made the state government look better, in large measure because it counted as state spending the money “recaptured” from richer districts and distributed by the state to poorer districts. The LBB analysis showed the money raised by local school districts and the money raised by the state; those recapture dollars — raised by local school districts from property taxpayers — were counted as local money.

It’s the kind of difference that matters to finance folks, who have uses for both analyses.

But for politics, it matters a lot — especially in a state that puts a remarkable burden on local school district taxpayers to pay for public education. To those taxpayers, who are also voters, it looks like the state shares a lot of the blame for high property taxes.

Some state officials actually found that to be both true and a useful argument for righting the state/local share of public education spending — one of the goals of the Legislature’s latest school finance bill. Others like those TEA numbers better because they made the state look more responsible and also a lot closer, in dollar terms, to righting the local/state balance.

Patrick has suggested splitting the LBB into a House budget office and a Senate budget office, so each could work with its own preferred analysts.

It could work, but those analysts will have differences, especially if the chambers are split on fiscal policy. Someone will have to settle their fights, a situation that will mean more power for another elected official — the state comptroller of public accounts, who ultimately decides whether the numbers underlying the state budget are realistically and prudently assembled.

The article was published at Analysis: Beware of Texas politicians bearing home-brewed arithmetic.