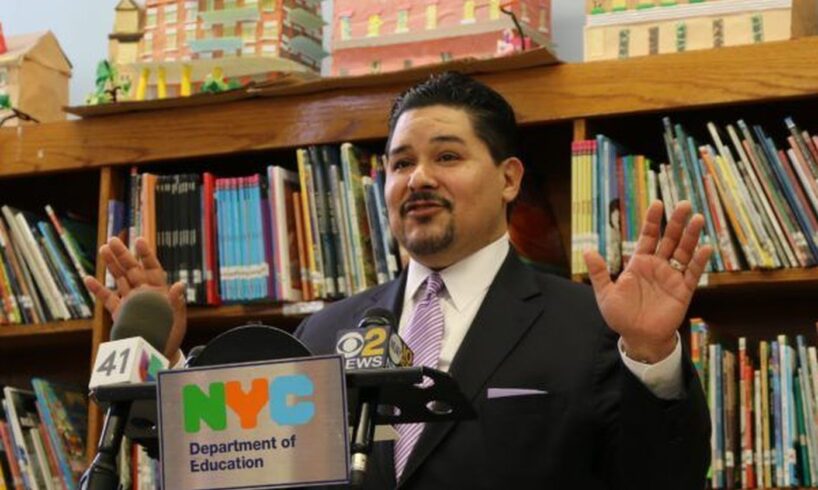 With just over two weeks before school buildings are set to reopen, New York City is encouraging principals to find outdoor learning space in nearby parks and streets, an idea that Mayor Bill de Blasio slow-walked for over a month.

The announcement gives principals the official go-ahead to set up classrooms in schoolyards and creates a formal process to use off-campus outdoor space in parks or on adjacent streets — something schools had previously requested only to find lots of red tape. School leaders are now being encouraged to consider using outdoor space for art, physical education, chorus, and drama, though holding traditional academic classes outdoors is also allowed.

“Principals have been asking for this,” schools Chancellor Richard Carranza said at a press conference on Monday. “Our sister agencies and the Department of Education are taking on the bureaucracy to streamline the approval process.”

Outdoor learning could help reduce the threat of COVID-19, as the virus does not appear to spread as effectively outside. It could also mitigate the risks of old buildings, where air circulation may be lacking due to faulty ventilation systems and windows that do not open. Officials said they are prioritizing outdoor learning in 27 neighborhoods that have been particularly hard by the pandemic and at schools with no existing outdoor space.

But the city’s program, which also applies to charter and private schools, omitted many key details. Officials did not say whether schools would receive any additional resources or materials such as tents, though Carranza suggested parent associations could fill in gaps, sparking swift backlash given the vast disparities in fundraising between schools.

‘Far Too Late and Haphazard’

The plan also comes more than a week after school leaders were required to submit their hybrid learning plans, detailing how many students could learn in-person at a time, raising questions about why the city did not roll out its outdoor learning approval process sooner so principals could incorporate it into their planning.

“Once again, the city and [education department] have made decisions, rolled out guidance and announced a deadline far too late and haphazardly for school leaders to develop and implement a thoughtful and well-constructed plan,” Mark Cannizzaro, president of the Council of School Supervisors and Administrators, the union that represents principals, said in a statement.

The tight timeline to set up outdoor learning before the school year begins on Sept. 10 adds to a dizzying array of logistical questions principals must answer as they simultaneously launch virtual and in-person learning.

Principals are encouraged to submit their outdoor learning requests by Aug. 28 and officials said they will respond by Sept. 4, after which requests will continue to be considered on a rolling basis. The decision to approve requests will be made by a working group, which will include officials from the city’s parks, fire, police, transportation, and sanitation departments. Officials said outdoor classes will not increase the amount of time students can expect to learn in person.

Schools that want to use street space are “strongly encouraged” only to request those with limited traffic, not on an existing bus route, and not used by a parking garage, hospital, or fire station. But actually managing the space appears to be up to schools themselves, which will have to “provide staffing and barriers to close any street,” according to a press release.

It’s unclear to what extent the education department will help schools set up outdoor learning; de Blasio downplayed the cost of the effort, declining to provide a dollar amount the city will commit. He said if there are additional costs “we’re going to be supportive any way we can.”

Counting on Kindness of Strangers

Katie O’Hanlon, and education department spokesperson, said schools would be expected to draw on existing resources but also said the city also plans to seek out philanthropic support.

If schools are tasked with pulling off outdoor learning on their own, that could give those with more resources a leg up. Some parent associations have already begun raising money for supplies and outdoor tents, Carranza said. Asked about how the city plans to address disparities in access to additional outdoor learning materials, the chancellor suggested that wealthier PTAs could help other schools.

“I’m asking that if a PTA has done their fundraising and they’ve raised more than enough for their school, let’s identify another school that doesn’t have that fundraising capacity — let’s help them out, too,” Carranza said. An education department spokesperson did not elaborate on how PTAs would be encouraged to share resources and Carranza has not implemented policies that would require parent groups to share funding.

Mark Treyger, chairman of City Council’s education committee, blasted the suggestion that parent associations could step in. “Relying on PTA fundraising to fund this effort only exacerbates inequity,” he wrote on Twitter.

The outdoor learning announcement won mixed reactions from teachers and elected officials. Brad Lander, a Brooklyn city council member who advocated for outdoor learning, praised the announcement but said the city needs more funding from the state and federal governments to pull it off equitably.

Liat Olenick, a Brooklyn elementary school teacher who has pushed for outdoor education, said the move could benefit teachers like her. She was granted a medical accommodation to teach remotely because she has a compromised immune system due to a liver transplant, but would be open to teaching in person if she could work outside.

Still, she worries that with just over two weeks to plan before campuses are set to welcome back students, the opportunity might be lost for many schools.

The article was published at NYC Schools Can Hold Classes Outside This Fall, And Chancellor Suggests Well-Funded PTAs Could Help Pay for It.