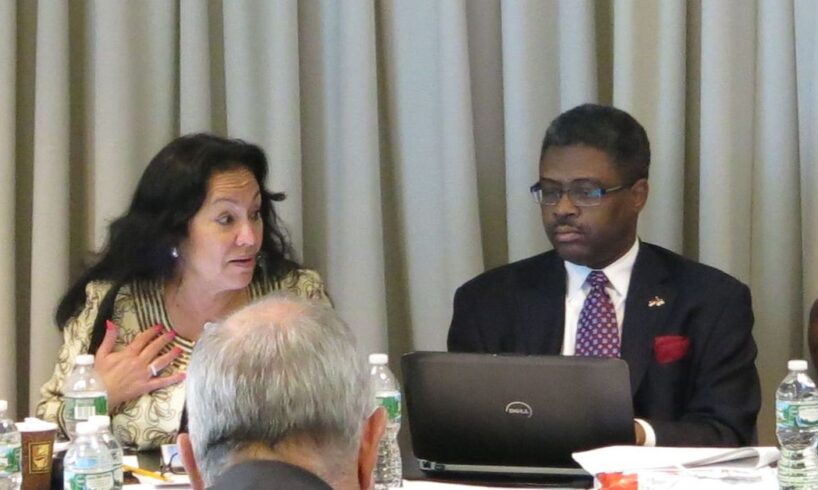 As Gov. Andrew Cuomo forges a path ahead for reopening schools in New York, so is the state education department — and they don’t agree whose job it is.

Cuomo has asserted that the timing and manner of how schools will reopen is up to him. But that job should largely be up to the state education department, with lots of input from the community, Board of Regents Chancellor Betty Rosa said in multiple interviews this week.

“From the constitutional perspective, education is our landscape,” Rosa said during a panel discussion with news organization City & State. “All I say is, let us do our work, let us work with the individuals that have to be engaged in looking at the economy, but we must do this together.”

Cuomo, who sparred with New York City Mayor Bill de Blasio over school decisions, said he is the final arbiter across the board — though both have recently insisted they are “on the same page.”

Meanwhile, conflict on the state level over education remains an issue. Cuomo launched a task force last month focused on reopening life in New York with a mix of CEOs and leaders in nonprofits, trade associations, unions and higher education. The governor quickly caught criticism from education observers for not including any K-12 teachers. Also noticeably absent was anyone from the state education department or the Board of Regents, New York’s education policymakers.

The next day, the Board of Regents launched its own task force. The state education department emphasized that they plan to staff their panel with dozens of educators, parents, and advocates.

Cuomo then doubled down on education. In his next move, he announced a special panel to “reimagine” education and virtual schooling for the future, employing the help of the Gates Foundation — immediately drawing backlash from educators and families wary of the foundation’s ties to the Common Core and linking student test scores with teacher evaluations. While this panel does include some district and union leaders, as well as Interim State Education Commissioner Shannon Tahoe, it does not include students, parents or any educators from New York City, the state and nation’s largest district — again angering city teachers and even the mayor’s office.Become a Chalkbeat sponsorhttps://f15d8bc3f36e26cb96649659fd774ac4.safeframe.googlesyndication.com/safeframe/1-0-37/html/container.html

“While I believe that the billionaires club or billionaires have some solutions and have a contribution in this conversation, I do not believe they are the individuals who should be engaged and involved in the reopening or redesigning of what we have to do for our school system,” Rosa said. “I really feel a sense of ownership. I feel that our state has to have state, local input and conversation with teachers who do this work every single day.”

Generally, Cuomo has been more eager than his predecessors to pursue education topics beyond state funding, such as teacher accountability and expanding charter schools, making his interest in “reimagining education” unsurprising, said David Bloomfield, professor of education at Brooklyn College and CUNY Graduate Center. But that has created tension.

“The problem stems from this unusual situation in New York where the governor doesn’t appoint the commissioner of education, and in fact doesn’t control the Board of Regents,” Bloomfield said. “Nor do we even have a separately elected education commissioner as in many states.”

There is a bigger picture to keep in mind, Bloomfield added.

What matters more than the “jockeying for power” and the multiple task forces of the governor’s office and the state education department is how schools and districts will be supported and overseen next year, as students and teachers will deal with trauma coupled with a loss of schooling as they knew it before, likely with much smaller budgets.

That job, Bloomfield said, is owned by the state education department.

“It’s unclear what any of these task forces will amount to, especially since school districts are fairly autonomous with their own elected school boards and budgets which are about to be determined,” Bloomfield said.

He added, “The governor may have macro power over whether schools reopen, but the micro power over state regulatory authority is probably more important in the post pandemic era.”

A state education department spokesperson did not comment on the apparent tension between both offices, saying only that more information on the Regents’ task force is forthcoming.

The governor’s office was in “continuous contact” with the State Education Department, Jason Conwall, a spokesperson for the governor’s office, said in an email after this story was initially published. The state was handling public health and safety, while the Regents were handling many of the specific education issues.

“The governor has the specific authority on when and how schools are re-opened,” Conwall said. ”This situation is still fluid and there is no playbook as to what comes next, so we need to be adaptable and continue to be guided by health and science. We are working through many of the issues with [the State Education Department]. For example, the Administration discussed how to proceed with summer school with [the education department] before making that final determination.”

Cuomo’s panel has broadly been studying reopening strategies. Some of that work could influence how the state eventually plans to reopen districts in the fall.

The board said it would send its recommendations to the governor’s reopening advisory board.

The article was published at Who should lead the reopening of schools in New York? The governor’s office and the Board of Regents both want the job.