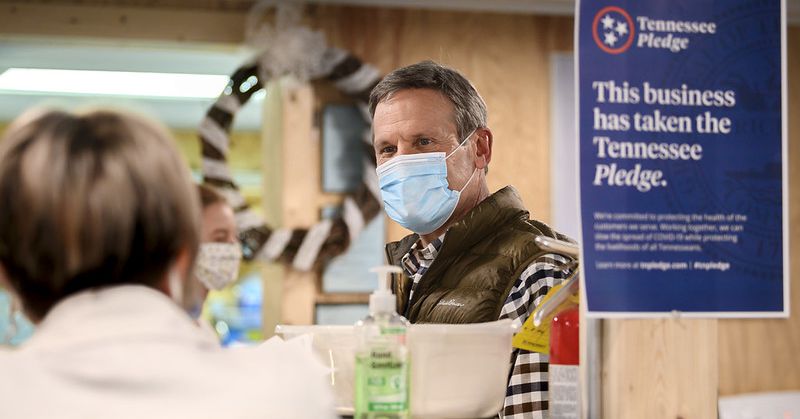 Gov. Bill Lee said Thursday his administration is committed to maintaining current state funding for schools, even as Tennessee faces a revenue shortfall that economists estimate will run between $500 million and $1.7 billion.

He’s defaulting to the legislature, however, when it comes to prioritizing new education spending such as a teacher pay hike, a scaled-down literacy initiative, and the state’s embattled education savings account program.

“It’s very difficult to know what the future is,” Lee said, but “we need to make certain that we provide funding for our public school systems all across the state, as education is arguably the most fundamentally important piece of our budget.”

“Every other initiative will be decided by the legislature,” he said in response to questions from reporters during his weekly press conference on the coronavirus.

The governor’s comments came as the legislature prepares to revisit an emergency budget passed in March before lawmakers recessed abruptly as the coronavirus shut down schools and businesses nationwide.

“The impact of COVID-19 on our economy and our state revenues is projected to be unparalleled in terms of both its suddenness and magnitude,” Butch Eley, commissioner of finance and administrataion, wrote in a memo to department heads on Tuesday.

“This economic situation came on quickly and will now require a multiyear approach of restraint and reductions,” he added.Become a Chalkbeat sponsor

Tennessee’s K-12 budget accounts for more than $6.5 billion out of the state’s $39 billion spending plan. A 12% reduction would require cutting funding to schools through the formula known as the Basic Education Program, or BEP. But Eley told the Senate Finance Committee on Thursday that the BEP will be spared because public education is among services considered “mission critical.”

“We’re going to do this in a fashion that I think is logical, rational,” Eley said.

Earlier this week, four economists presented grim economic forecasts to the State Funding Board, which charts state fiscal policy and is led by the governor. All four agreed it will take years to recover from the last three months of job losses and revenue shortfalls, while two warned that the outlook will worsen if the virus is not contained.

“The course of this recovery will be determined by the virus,” said Bojan Savic, an analyst from Tennessee’s Fiscal Review Committee.

Meanwhile, legislative committee work resumed this week and lawmakers have begun to discuss other cuts that need to be made, as well as spending priorities for the fiscal year that begins on July 1.

The House Education Committee was expected to take up a scaled-down literacy bill later Thursday aimed at training current and future teachers to take a phonics-based approach to reading instruction. That could come at a cost of up to $48 million to provide training on foundational principles of literacy.

The legislature also is expected to revisit a 2% teacher pay increase included in the state’s emergency budget, as well as $41 million for the school voucher program that Lee continues to champion, even as a judge overturned Tennessee’s education savings account law earlier this month. The state is appealing that decision to the Tennessee Supreme Court in hopes of still launching the program this fall.

The article was published at Tennessee governor commits to preserving state funding for schools during budget crisis.