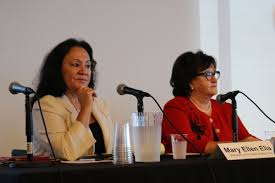 New York’s Regents Chancellor Betty Rosa will resign from her post to assume the role of interim commissioner for the state education department, the Board of Regents announced Tuesday.

The Board of Regents tapped the Bronx educator, who has served as chancellor since March 2016, to fill the temporary position that has been hard to staff. Rosa is the department’s third interim commissioner since MaryEllen Elia resigned last August. The Board of Regents originally expected to fill the top job this summer, but has now extended their search for a permanent commissioner through at least October, officials said. In fact, Regent Roger Tilles said it could be “nine months or so” until the job is filled.

Rosa’s appointment, replacing Interim Commissioner Shannon Tahoe, comes at a time of unprecedented challenges for New York education. Districts with slim budgets are preparing to offer a mix of in-person and virtual learning in the fall amid the lingering coronavirus pandemic.

Rosa’s role will now shift — from having the power to deny policy proposals, to seeking board approval for them. But she has likely forged some deep relationships with board members as their leader for the past four years. As interim commissioner she will earn an annual salary of $324,000, according to the department. Regents do not earn a stipend.

Rosa told her Regents colleagues at Tuesday’s meeting that her decision to switch roles was “very painful,” but she believed it was the right choice to maintain stability for districts ahead of the fall.

Rosa has served on the Board of Regents since 2008. Before that, she spent a career teaching in the Bronx, rising to become a principal and eventually superintendent of District 8.

The article was published at NY Board of Regents taps its own chancellor to become interim education department commissioner.