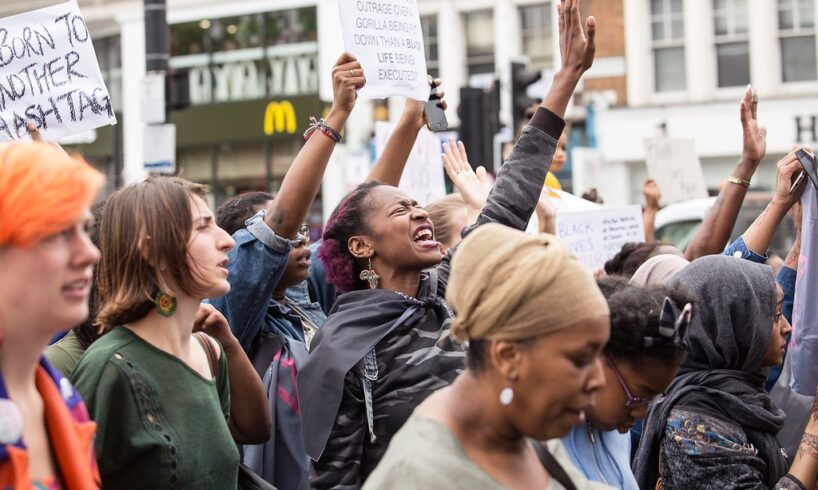 People living in Bahama Village are using the recent protests against police violence and systemic racism to speak out about how rising costs are pushing them out.

On the same humid evening Key West, Florida reopened to visitors during the coronavirus pandemic, 500 locals gathered in the historically Black neighborhood of Bahama Village to protest police violence and systemic racism. One resident, Paulette Rivas, shared her fears with a sea of mask-covered faces. “I’ve got a thirteen-year-old,” she said, her voice cracking. Her son stood nearby. “I’m scared y’all,” she added. “I’m scared. Stop killing us.”

Anton Lopez, 43, who helped organize the peaceful protest, urged people to unite. A long list of local officials also made statements, including the mayor, city commissioners, the chief of police, and the county sheriff. “We are different,” said Teri Johnston, the first openly gay female mayor of Key West. “Let’s show the world what a community looks like, how a community acts, and how we take care of each other.”

“One Human Family” is Key West’s official motto, and the town of just over 24,000 people prides itself on unity. Yet despite the picturesque setting and local government support, Black residents have spoken up over the last week about racial inequities they face. One of the most glaring is the rapid gentrification of the island as high prices push out many in Bahama Village: Wealthy second home buyers offer large sums for their properties, which are only steps from Duval Street, Key West’s main commercial strip filled with restaurants, souvenir shops, and drag venues.

“I think we are as tight-knit of a community as it gets, but I do think there are underlying issues we need to talk about,” said Dexter Butler, a middle school educator whose family came from the Bahamas in the 1890s. “And not just talk about it, but we need to see some action.”

It’s a financial struggle for many Bahama Village residents to continue living on the island, so they move away. “The fabric of this community is being replaced,” said Lopez, a descendant of a family who came to Key West from the Bahamas in 1866. “The remaining Bahamian Conchs and their lineage are further becoming squeezed out of their American Dream here.”

For more than a century, the 16 short blocks of Bahama Village has been home to descendants of Cuban and Bahamians who moved to Key West in the 1800s. Wreckers, fisherman, and spongers arrived after the U.S. passed a law requiring salvaged goods be brought to American soil instead of Nassau or Havana. Some other Bahama Village residents are the descendants of freed African slaves forced to labor at two Army forts in Key West.

As Key West’s population expanded, so did the village. During segregation, the Frederick Douglass School was known for its high standards in education, music, and sports. Petronia Street was the thriving shopping center for Black-owned businesses until the Navy left Key West in 1974, taking money and civil service jobs with it. The island turned to a tourism economy, and outsiders started buying out property and businesses. By the 1990s, huge chunks of Bahama Village were bought out by mostly white tourists. Now there are only two Black-owned businesses left in the neighborhood.

According to 2019 Census data, Key West’s total population is about 13% Black, with around a quarter of Black residents living in Bahama Village. In the past several decades, they’ve been pushed out, and now, 56% of the neighborhood’s residents are white. Much of this change is attributed to the dramatic increases in cost of living: The average wage-worker is in the service industry and makes under $38,000 a year, while the average single-family home costs $748,000. A 2018 United Way study showed that over half of Keys’ families with children live below the federal poverty line and struggle to pay for their basic needs, like prescriptions, insurance, bills, gas, and food.

Environmental factors further exacerbate the problem — particularly climate change, which is causing property prices to increase. Recent hurricanes have destroyed cheaper housing like houseboats and mobile homes, and rising sea levels are forcing the county to change flood insurance and height requirements, which can be costly for homeowners. In some cases, property owners are evicting tenants from affordable housing areas to sell to out of town developers.

The city and Monroe County have made efforts over the years to address this problem. Five years ago, Key West officials projected a need for 6,500 affordable units. There are about 2,000 low-income and affordable workforce housing units for rent in the county, with another 103 being built. But affordable housing isn’t affordable for many people. The median rent for a two-person household workforce home is nearly $3,000. “A lot of people are saying hey, it’s either I sink, or I sell my property,” said Lopez. “And I get out so I can survive somewhere else.”

As Key West changes, Lopez is trying to keep his Bahamian-Hispanic culture alive. His food truck, Island Boyz Seafood, sells Bahamian dishes like cracked conch and griot. He sells to locals daily and to tourists at the Bahamian-Heritage Goombay Festival every October. “I continue the legacy because that’s what I grew up on,” he said.

There’s also a larger movement gaining traction, with the support of the Bahama Village Redevelopment Advisory Committee (BVRAC), a predominantly Black board of city commission-appointed leaders from the local district. With funding from the city, they renovated Douglass Gym, a beloved community hub that houses after-school music programs, tutoring, and basketball leagues. In recent years, the community has been split on whether to use Douglass band room as a museum or a healthcare center, so the committee is working to do both.

The committee’s latest plan, which is from 2017, outlines a proposed $21 million dollar investment to utilize former Navy property for affordable mixed-income housing — land that has long been promised to help restore the area.

Though it’s an uphill battle for many residents, the recent protests have shed more light on the urgency of the problem. “My dream for Bahama Village is being able to afford to live there,” said Aaron Castillo, 57, who has been the chairman of BVRAC since it was founded in 2008. “A village isn’t a village without the people you serve.”

Stephanie Leone is a multimedia journalist in Key West, Florida.