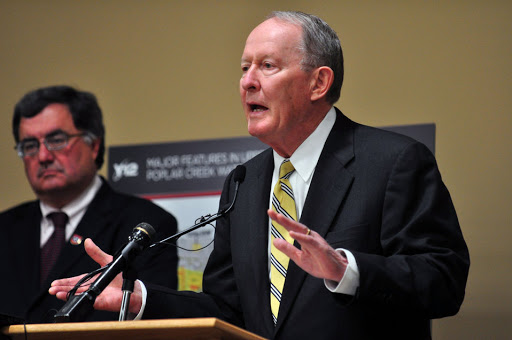 (The Center Square) – No fewer than 20 candidates will be on the ballot Thursday to fill retiring Tennessee U.S. Sen. Lamar Alexander’s vacant seat: 15 Republicans and five Democrats.

Of the 15 candidates in the Republican primary, polls show the two top contenders are former ambassador to Japan Bill Hagerty and Nashville surgeon Manny Sethi.

A poll of 1,062 likely Tennessee voters by the Trafalgar Group showed in July that 42 percent of likely Republican voters would support Hagerty, and 39 percent of voters would support Sethi. Nearly 13 percent were undecided. Politico reported last week that internal polling from the Sethi campaign showed the candidates were within two percentage points of each other.

The race has grown increasingly negative in the past few weeks.

Sethi was first to declare his candidacy last year, running as a political outsider. The son of two immigrants, Sethi is a Nashville trauma surgeon and runs a health education nonprofit called Healthy Tennessee.

“Left-wing mobs have burned cities, beaten Americans, and screamed to defund the police. This isn’t about racism, this is about the soul of America,” Sethi said in a recent ad. “I love America. This country gave my family everything, and I’ll fight for her.”

Sethi has earned the endorsements of U.S. Sens. Rand Paul, R-Kentucky, and Ted Cruz, R-Texas, who both have visited Tennessee to campaign with Sethi, as well conservative commentator Mark Levin, former Congressman Zach Wamp, and former U.S. Sen. Jim DeMint. According to Federal Election Commission data, Sethi has spent about $4.2 million on his campaign, as of the last quarter.

Hagerty had the endorsement of President Donald Trump even before he declared his candidacy. Before serving as U.S. ambassador to Japan under Trump, Hagerty served as Tennessee’s commissioner of economic and community development under former Gov. Bill Haslam.

“I’m a business leader who’s had real-world experience,” Hagerty said in a recent ad. “As the U.S. ambassador to Japan, I represented America to the third-largest economy in the world. No one loves this nation more than I do. I want that same opportunity for your children and grandchildren, just like I want them for mine.”

Trump has hosted several tele-townhalls for Hagerty, and members of the Trump family have visited the state for Hagerty fundraisers. Hagerty also has earned endorsements from Tennessee’s other U.S. senator, Marsha Blackburn, and U.S. Sen. Tom Cotton, R-Arkansas, both of whom have campaigned with Hagerty. According to FEC data, Hagerty has spent nearly $9.7 million on his campaign.

Five candidates are contending for the Democratic nomination to replace Alexander. The frontrunner is James Mackler, a former Army helicopter pilot and attorney.

“We need every Tennessean to exercise their right to vote,” Gov. Bill Lee said during a news briefing Tuesday. “Make sure that you let your voice be heard in the ballot box. It’s not just a tradition, it’s an important piece of this country and of sustaining this democracy.”

The article was published at Here are the top primary races Tennessee voters will decide Thursday.