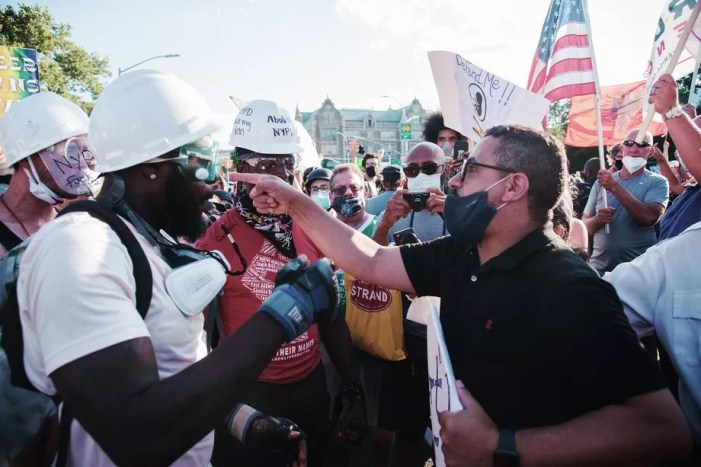 Andrew Gounardes, who helped Democrats gain a majority in the State Senate when he won his southern Brooklyn seat in 2018, slammed Republicans for organizing a “Back the Blue” rally last weekend, where pro-cop protesters and anti-police-brutality counter protesters clashed in Dyker Heights.

Gounardes pointed at the vile language used by at least one pro-NYPD protester and demanded that GOP elected officials and party leaders repudiate the racist, misogynist rant.

“You are responsible for this. I call on you to denounce the ugly behavior that took place at the event you organized, and make it clear that it is never OK to threaten peaceful protesters with violence or rape,” Gounardes said in a statement to THE CITY.

In the weeks since anti-racism protests sparked by the deaths of George Floyd, Breonna Taylor, Ahmaud Arbery and others spread across the country, many local candidates have taken to the streets — some to join Black Lives Matter protesters and other to join pro-police demonstrators.

Now, where the candidates stand is quickly becoming a rallying point for Republicans being out-fundraised by Democrats as they try to take back seats in Brooklyn and Staten Island swing districts.

Gounardes’ Republican opponent, Vito Bruno, a former nightclub manager who ran for Brooklyn borough president in 2017, slammed the hateful comments captured on video. But he still supports the “Back the Blue” demonstrators, whom he joined.

“I condemn disrespectful, abusive, threatening, or insulting comments to counter-protesters, but I’m not even sure if the people involved in that specific altercation were part of our march, but it shouldn’t have happened,” said Bruno in a statement. “Some of the folks demonstrating against the police used some pretty objectionable language themselves, but we shouldn’t let one unfortunate situation erase the fact that people of all sorts of ethnic backgrounds and age groups gathered to show their support for our Police Department.”

She also attempted to tie him to the “defund the police” movement, which he has come out against: “Take action: stop Max Rose and de Blasio’s $1 billion cut to the NYPD,” a page of her campaign website declares.

Rose accused Malliotakis of being “a hypocrite” after she lauded peaceful Black Lives Matter demonstrators.

“Nicole praised the Black Lives Matter protests, calling them ‘an example for the nation,’ but now she’s pretending that never happened,” said Rose in a statement. “I believe we can pursue social justice in this country, but unlike her, I also understand the life and death decisions that our cops make everyday — and I have great respect and the deepest of gratitude for their service and sacrifice. So I’m not going to bother with nonsense from a fraud politician like her on how to support our courageous men and women in blue.”

Malliotakis called the “Back the Blue” demonstration a “nonpartisan event…to show support for the NYPD and demand law and order be restored in our city.”

Citing bail reform, plans to close Rikers Island and efforts to defund the NYPD, she dismissed Gounardes and Rose as “part of the problem.”

Rallying around issues close to their base may be essential for Republicans whose campaign war chests pale in comparison to their Democratic counterparts.

In a race to retain Brooklyn’s last GOP-held seat, Michael Tannousis, a Republican and former prosecutor, has been attending pro-cop rallies on both sides of the district, which includes Staten Island.

“Never before have our men and women in blue needed the support of our community as they do now,” said Tannousis, who is running for Malliotakis’ Assembly slot.

Meanwhile, his Democratic opponent, Brandon Patterson, who has campaigned as an old-school union supporter and a moderate, has avoided the protests.

”I’ve been focusing on talking to voters directly and finding out what is driving them to the polls this November,” said Patterson, adding that voters he’s been speaking with are most concerned about economic stability and the possibility of a second COVID-19 wave.

The article was published at Black or Blue? Protest Movements Take Center Stage in Races for NYC’s Swing Seats.