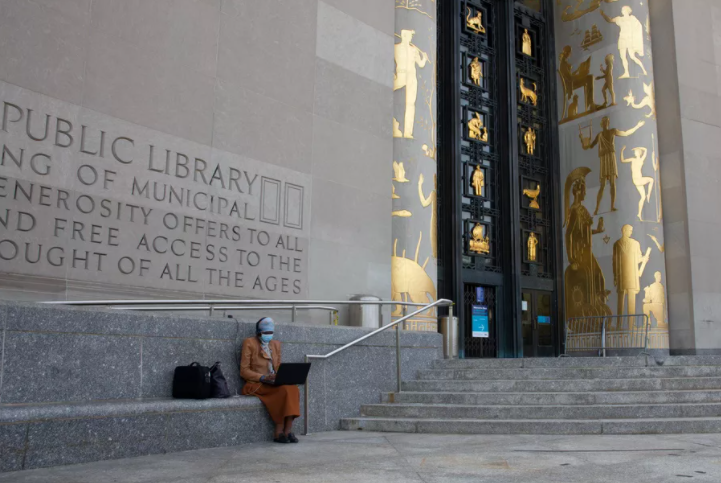 One New Yorker uses the free WiFi in front of libraries to research music. Another watches movies on Netflix as she charges her computer, while a man videochats with a friend on his laptop.

Across the city, people without internet service at home or with limited service on their phones huddle in front of or near some of the city’s 207 branches for access at all hours.

Government officials have long struggled to offer WiFi to an estimated 1.5 million people who can’t afford private plans for a mobile hookup or home broadband. In February, the de Blasio administration announced an “Internet Master Plan” to expand coverage for people in public housing and other spots with big gaps.

“We have long known that there is a serious digital divide in our city, but the pandemic and resulting lockdown emphasized how wide that gap is,” said Brian Bannon, the New York Public Library’s Tisch Director for Education and the chief branch librarian.

The city’s three library systems closed their branches in mid-March to mitigate the spread of COVID-19, but kept the WiFi on at all buildings. That has enabled people, in some cases as far as a block away, to log on free of charge.

“We see people sitting out here all the time,” said one librarian at the Coney Island branch of the Brooklyn Public Library, which is now open for grab-and-go service.

At the central branch, a group of people converge each day on the broad steps by Grand Army Plaza.

“The options on your cell phone come with incredible costs,” said George, who didn’t want last name published, as he researched music on his laptop in front of the sprawling Beaux Arts building.

“You see some regulars here,” he added, noting that the library’s plaza is one of the few public places with free electric outlets.

On Monday, one patron converted the stone sitting area into an ad-hoc office. She wore headphones as she typed away on her plugged-in laptop.

The Queens system has recorded an average of 160,000 WiFi sessions per month, according to spokesperson Elisabeth de Bourbon. Twenty of its branches have outdoor extenders that boost the WiFi signal 150 yards from the buildings, about a football field and a half away, she said.

In Brooklyn, library officials estimate people connected to WiFi approximately 185,000 times from April through August “with many patrons sitting outside of our branches,” said system spokesperson Fritzi Bodenheimer. The figure is about 27% of the usage rate before COVID-19 shut branches, she said.

The New York Public Library system — which covers Manhattan, The Bronx and Staten Island — has hosted between 500 to 1,000 WiFi sessions per day since March. That’s down from the 8,000-a-day average before the pandemic, said Angela Montefinise, an NYPL spokesperson.

The three library systems also each lend a few hundred hotspot devices to parents of children in school and other patrons.

On Friday morning, one man used a pillow as a cushion so he could sit comfortably in front of the Kensington branch on 18th Avenue in Brooklyn. The unidentified man, who didn’t want to talk to a reporter, video chatted via his Mac laptop.

That neighborhood, along with the Lower East Side, Hunts Point in The Bronx and Jamaica, Queens, are some of the most “underserved communities” when it comes to household internet service, according to city Comptroller Scott Stringer, whose office has conducted reviews into the digital divide.

His report, issued last summer, found that 44% of New Yorkers in poverty lack broadband access at home, compared to 22% living above the poverty line.

The review cautioned that “glaring disparities” in internet access could cause a “potential barrier to conducting a full and accurate census count.” The census can be filled out online.

Libraries across the country have come up with unique ways to bridge the digital divide, said Jessamyn West, a library technologist based in Vermont.

In Denver, the public library system launched a pop-up laptop service and lent the devices to patrons outside on tables for 30-minute sessions.

“It’s really critical. It’s impossible to apply for a job or write a resume to do telemedicine on a cell phone if you are lucky enough to have a smartphone,” Michelle Jeske, Denver’s City librarian, told WBUR.

Libraries have been getting additional funding for WiFi and other technologies since the pandemic, according to West, who follows national trends.

Some libraries are also loaning out their Zoom rooms for local meetups to use, West said.

In New York City, free WiFi is also offered in the city’s subways and many parks as well as some museums, as well as via nearly 1,800 LinkNYC kiosks.

When public schools closed in-person instruction in March, the city Department of Education began to distribute 321,000 free iPads to enable students to participate in remote classes.

The iPads now function as mobile hotspots and have data plans from T-Mobile. The service is filtered via security software Zscaler that blocks sites the DOE “deems as unsafe such as obscene or offensive content, language and photography.”

The Article was originally published on WiFi Sign of the Times as New Yorkers Gather Outside Libraries for Free Internet.