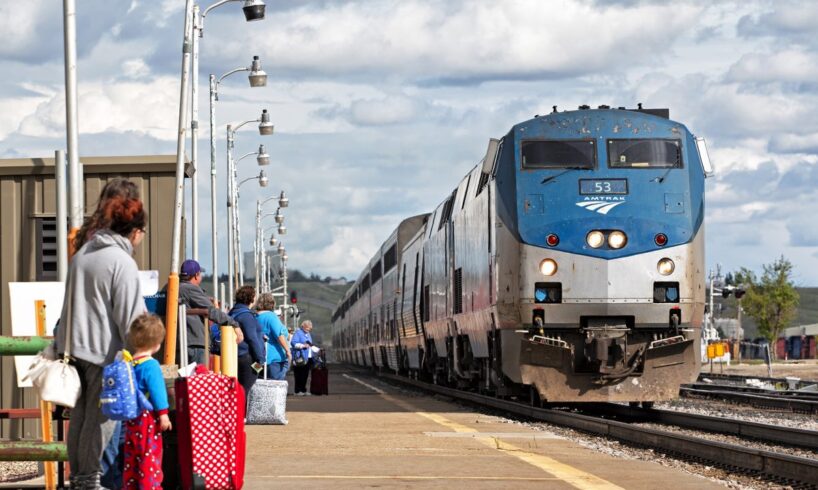 Whitefish is the busiest stop in Montana for Amtrak’s daily Empire Builder passenger train, which runs between Chicago and Portland or Seattle. The more than 55,000 people who board or disembark the train in Whitefish every year account for nearly half the line’s Montana ridership. So when news arrived a few weeks ago that Amtrak will reduce service from daily to just three days a week in response to declining ridership due to the COVID-19 pandemic, it was yet another blow for a town that relies heavily on tourism.

“This loss adds to everything else that’s piling on,” Whitefish Chamber of Commerce Executive Director Kevin Gartland told the Whitefish Pilot.

But the Flathead Valley has an airport with direct flights to major hubs like Seattle, Salt Lake City, Minneapolis and Denver. That’s not the case for Empire Builder-serviced towns along the Hi-Line, where driving is often the only alternative, and where the reduction in service will undoubtedly have a bigger impact when it goes into effect Oct. 1.

And while Amtrak officials have said the reduction will be temporary, passenger rail advocates worry it could be the beginning of the end for long-distance trains like the Empire Builder.

Amtrak’s ridership dropped by 95% within weeks of the coronavirus’ arrival in the United States. In May, the railroad requested an additional $1.4 billion beyond its normal funding from Congress to maintain its current level of service. As of early July, it has not received that additional funding. Amtrak is now aiming to cut $500 million from its $1.8 billion annual budget, and said it can accomplish part of that by reducing train frequency to three days a week on its 15 long-distance trains, including the Empire Builder. Amtrak officials have said that they would resume regular service once ridership demand increases, possibly as early as summer 2021.

This isn’t the first time service along the Empire Builder route has been reduced. On two separate occasions, once in the late 1970s and early 1980s and again in the 1990s, the train’s frequency was reduced due to budget issues. While Amtrak has said it will save $150 million by reducing long-distance service, critics including Mark Meyer, a Cut Bank native and passenger rail advocate who now lives in Portland, said service reductions do more to cut demand than to cut costs.

“Cutting the schedule has never worked, because people didn’t change their travel plans to when the train ran, they just didn’t ride it,” said Meyer, who worked for freight railroads Burlington Northern and BNSF Railway for more than 40 years.

Meyer said the cuts will have an enormous impact on small towns that don’t have transportation alternatives, and he knows that struggle firsthand. Meyer’s job with the railroad took him to Seattle in the 1980s, but when his parents in Cut Bank began to have health problems, he needed to return frequently. In the early 1990s, Meyer made the 10-hour drive back to Montana about every three weeks. He didn’t mind the drive in summer, but when winter came, he took the train.

“I remember riding the train over Marias Pass in winter and looking out the window at U.S. Highway 2 and it would just be a sheet of ice,” he said.

Meyer said he’s known others from the Hi-Line who have had to use the train to get to medical procedures in Seattle or to the Mayo Clinic in Minnesota. Not only was the train the easiest option because it serves the Hi-Line, it was less of a hardship than flying.

Barb and Chuck Salerno are retired and have lived in Havre for more than 30 years. They take the train twice a year for vacations or to visit family back east. Barb said the reduced service will complicate their travel plans in the future.

“We could fly out of Great Falls, but we just don’t like to fly,” she said. “It’s such a huge hassle.”

Shelby Mayor Gary McDermott said the passenger train is the community’s only daily public transit option, and that without it a lot of his fellow residents, especially older ones, could be stranded. Besides Amtrak, the only option for public transit in and out of Shelby is a twice-weekly bus that takes seniors to medical appointments in Kalispell or Great Falls.

But the loss of daily service is only one of the issues that concerns McDermott. As part of the cuts, Amtrak plans to reduce its workforce by 20% nationwide. Amtrak spokesperson Marc Magliari said the company will offer employees a voluntary incentive package. Magliari said he doesn’t know how many of Amtrak’s Montana employees would be impacted by the cuts. (In 2017, Amtrak employed 43 people in the state, including conductors, engineers and station agents, bringing in more than $3.8 million in wages). But McDermott said the loss of even a few of those jobs would have a big impact on a small town like Shelby.

“It would be devastating, because those are really good-paying jobs with great benefits,” he said.

Barry Green, a retired railroader in Glendive and the Montana representative to the Passenger Rail Association, the country’s largest passenger train lobbying group, said he’s worried about what the cuts may mean for the long-term health of the Empire Builder. In the last few years, Amtrak has made a number of cuts to its long-distance services, including eliminating the station agent positions in Shelby and Havre (though McDermott recently learned that Amtrak will be hiring them back on a part-time basis) and replacing freshly cooked on-board meals with boxed lunches on some routes. While Amtrak has said the moves were made to save money, Green thinks it shows Amtrak officials on the East Coast just aren’t interested in running the long-distance trains that serve rural communities.

“Even before the virus, Amtrak had done more to run off business than grow the business,” he said.

The Article was originally published on Amtrak cuts could have outsized impact on Hi-Line.