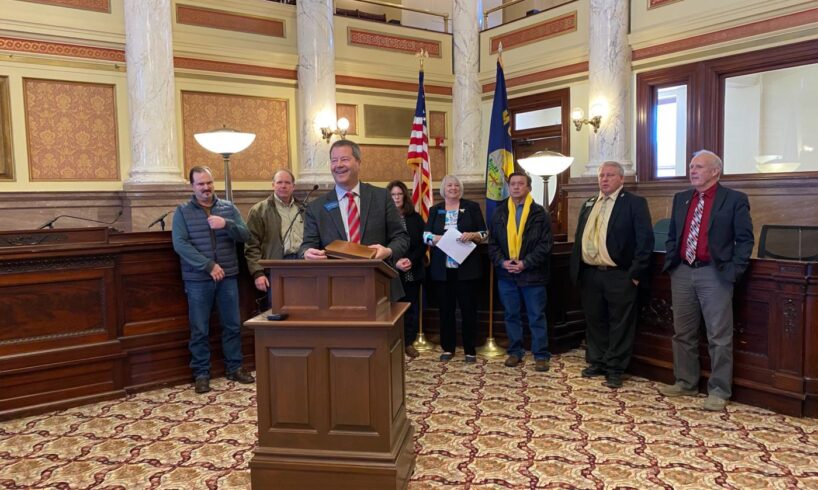 HELENA — State Sen. Al Olszewski and four other elected Republicans on Wednesday urged U.S. Sen. Steve Daines to withdraw federal legislation that would finalize a long-negotiated water compact between Montana, the federal government, and the Confederated Salish and Kootenai Tribes.

Speaking at a press event at the Montana Capitol, Olszewski and other speakers criticized Daines’ legislation and the compact, saying it doesn’t effectively address their concerns about yielding some western Montana water rights to tribal control.

In response, Daines Press Secretary Julia Doyle released a statement Wednesday saying “The Senator and his staff have engaged in dozens of meetings to build bipartisan support to resolve the CSKT water dispute, including many meetings and calls with State Senator Al Olszewski himself prior to his run for higher office. The Trump administration has analyzed the compact and recommended we introduce a settlement rather than litigate.”

The Daines-Tester bill, the Montana Water Rights Protection Act, would resolve a century-old water rights dispute and allocate $1.9 billion to settle federal damage claims and to rehabilitate the deteriorating Flathead Indian Irrigation Project. In exchange for the tribes’ agreement to relinquish claims to off-reservation water rights, the bill would also return control of the National Bison Range on the Flathead Indian Reservation to the tribes.“Our constitutional water rights are worth fighting for, even if it means going to court.”

The CSKT compact is one of several agreements between the state, the federal government, and individual American Indian tribes that seek to reconcile historic treaty agreements with Montana’s modern water rights framework, which treats water allotments as property rights and gives precedence to senior claims.

Since narrowly passing the Montana Legislature in 2015, the CSKT compact has languished at the federal level. After Trump administration officials signaled support for the compact in November, Daines and Tester announced the legislation in December.

Olszewski, R-Kalispell, has criticized the legal theory that forms the foundation of the CSKT compact, the notion that the 1855 Hellgate Treaty gives the CSKT water rights beyond the borders of the Flathead Reservation because the treaty guarantees tribal members the right to fish at “all usual and accustomed places.”

“This discussion that the water is a treaty right is wrong,” Olszewski said Wednesday.

Federal courts have held that identical language in other Indian treaties grants tribes “time immemorial” water rights to protect fisheries. As part of the compact negotiations, the CSKT have filed thousands of claims for off-reservation water rights in Montana courts, potentially limiting irrigation in 51 of the state’s 85 adjudication basins, according to the Montana Department of Natural Resources and Conservation. Those claims have been put on hold in the hope that a compact settlement will nullify them, avoiding the uncertainty, expense, and delay of litigation.

Olszewski, though, said Wednesday he believes compact critics would ultimately prevail if the claims are litigated through the state legal system.

“Our constitutional water rights are worth fighting for, even if it means going to court,” he said. “The people of Montana will pay for this, as we should — it’s our water.”

Brown joined Olszewski in questioning the nexus between water and the Hellgate Treaty, saying the treaty’s fishing provision shouldn’t apply because some other sections of the treaty, including one prohibiting liquor consumption on what’s now the Flathead Reservation, are archaic.

“We can’t selectively say what is and what isn’t” in the treaty, she said.

Decker said he worried about the potential for public land like Big Arm State Park to be passed to the tribes as part of the federal compact settlement arrangement.

“That language is not at all in the bill and not in the senator’s plan,” Doyle said.

The article was published at Olszewski and Republican cohort asks Daines to withdraw CSKT compact bill.