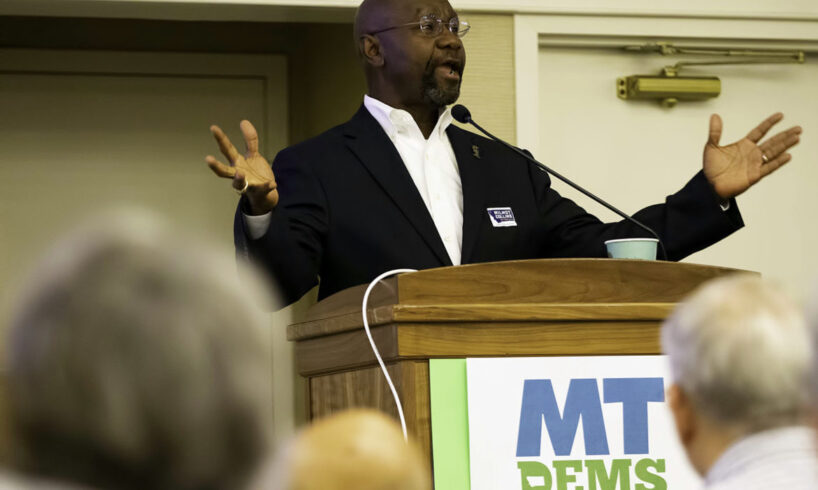 HELENA — Wilmot Collins didn’t bother to rehash his story on Friday afternoon. Most of the Democratic convention delegates gathered in the Helena ballroom where he spoke, Collins noted with a smile, were already familiar with his path from Liberian refugee to mayor of Montana’s capital city. So he cut straight to the message at the heart of his 2020 campaign against incumbent U.S. Sen. Steve Daines.

The brief speech came moments before the Montana Democratic Party dove headlong into its 2019 rules convention, and after a morning of informational sessions that featured fleeting drop-in appearances by U.S. Sen. Jon Tester and Gov. Steve Bullock.

Collins condensed the past 25 years of his life into rapid-fire bullet points: father, teacher, military veteran, civil servant. The brevity made sense. Collins’ 2017 victory over 16-year mayoral incumbent Jim Smith made him the first black mayor in state history, drawing a flood of media coverage including a segment last year on Comedy Central’s “The Daily Show.” Rather than repeat himself, Collins dedicated his allotted time to quick hits about health insurance and education, and to reminding party faithful that the job of elected officials is to represent Montanans, regardless of political affiliation.

“It’s not about Democrat or Republican,” Collins said. “That’s what we need to bring this state back to. We’re divided. If I’m representing you, I’ll represent all of you.”

Speaking with Montana Free Press prior to his speech, Collins hammered on the economic gap between himself and his Republican opponent even harder. Daines’ multimillionaire status, Collins said, is by far his challenger’s biggest challenge. But it’s also one of the reasons Collins entered the race.

“Not only the rich should be able to govern,” he said.

Elsewhere on the dais, four-term state Rep. Kimberly Dudik from Missoula plugged her bid for state attorney general. Dudik introduced herself as an experienced lawmaker and attorney with modest Frenchtown roots and a history of domestic violence advocacy. Dudik vowed that, if elected, she would work to protect consumers, safeguard Montanans’ rights, and reform the state’s criminal justice system.

“These are our values,” she said. “We need to get that office back.”

Friday’s most riveting moment came not during a speech, but in the closing moments of the day’s official business. After considerable debate, delegates voted to remove gendered terminology from the party’s rules, replacing all uses of “committeeman” and “committeewoman” with “committee person.” The vote drew widespread applause, with half a dozen delegates rising in recognition of the milestone. State Rep. Mary Ann Dunwell of Helena, who proposed the amendment, said Democrats have been talking the talk long enough, and it is time to “walk the walk.”

The article was published at Candidates and party make a pitch for inclusiveness at state Democratic convention.