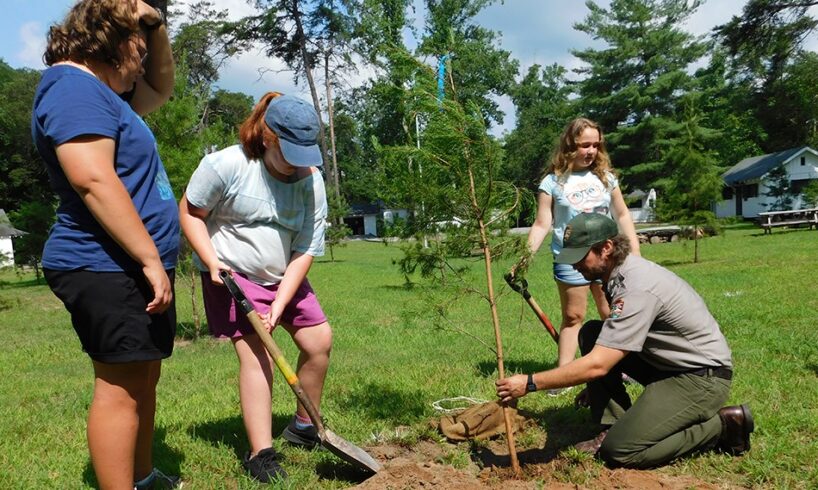 The Hechinger Report is a national nonprofit newsroom that reports on one topic: education. Sign up for our weekly newsletters to get stories like this delivered directly to your inbox.

This story was produced as part of the nine-part series “Are We Ready? How Schools Are Preparing – and Not Preparing – Children for Climate Change,” reported by HuffPost and The Hechinger Report, a nonprofit, independent news organization focused on inequality and innovation in education.

The teens of Duck Hill, Mississippi, aren’t the teens you see on television protesting the impact of climate change. They’re not missing school to rally in the streets. But they know better than most how climate change is affecting the world.

Their tiny, rural town of just over 1,000 people suffers from severe flooding, made worse by climate change. The Black side of town hasn’t had a proper drainage system for decades, either, leaving up to 15 inches of rainwater to linger on street corners for days after storms.

Or, at least, it never had an adequate system until recently, when the teens helped work on one.

Since 2018, a group of Duck Hill teens and community leaders have been tackling the climate-related problems that their state and local government neglect or haven’t had the capacity to fix. In the process, they have worked to change how their tiny town views climate change.

The group is called the ASEEDS Creek Rangers program― ASEEDS stands for Achieving Sustainability Through Education and Economic Development Solutions ― and it includes about 20 kids between the ages of 12 in 18, led by local leaders and funded through grant money. Its goal is to build a more sustainable future in the area. But it has also managed to foster a new generation of climate experts in a state where politicians continue to push climate change denialism and where science education on the topic is decidedly light.

This nine-part series explores how we’re teaching through climate change. We report on how climate change emergencies are disrupting student learning, exacerbating mental health problems, devastating school infrastructure, and how the coronavirus pandemic is a preview of what education looks like in a climate emergency. We also look at how textbooks are coming up short in teaching kids about climate, how medical schools are preparing future doctors, and how despite the obstacles some educators are finding ways to give students skills they need to better protect themselves and their communities.

Flooding in the area periodically causes schools to cancel classes. If the flooding in the Delta region continues apace, students will only miss more and more days of school. At the same time, the COVID-19 crisis has revealed how utterly unprepared the community is for remote learning. A survey of the group’s students found that nearly 90% didn’t have reliable internet access or devices.

“There are issues small communities face, and a lot of it is rooted in structural racism,” says Romona Williams, volunteer executive director of Montgomery Citizens United for Prosperity, the umbrella group that developed the Creek Rangers program. “They don’t receive the funding that other areas receive.”

When Climate Disasters Are A Fact Of Life

Until joining Creek Rangers, many of the group’s members had accepted the floods and other extreme weather events, like tornadoes, as a fact of life. They didn’t see them as part of a larger, systemic crisis. Clawing to survive amid weather-related disasters had become normal.

They learned, through Creek Rangers, that it didn’t have to be.

“They don’t talk about that kind of stuff in school,” says 15-year-old Keyunna McCaskill, a member of the group.

Adult leaders associated with the group first designed a system to fix the town’s drainage system, consulting with local experts like professors. A build-up of water would sit on street corners after storms, causing mosquito infestations. It would seep through the floorboards of homes, attracting snakes and mildew.

They designed a way to revamp the town’s antiquated drainage system, mitigating the effects of floods, in part through green infrastructure. A group of local men helped build the plan into action. Duck Hill is a poor, rural town, primarily composed of African American residents. The group tackled some of the issues that had long challenged political decision-makers. The youth got involved later on, helping to build out a green space on the town’s most problematic street corner.

“Mississippi is a climate-denying state. It’s a Trump state. There’s not a policy infrastructure in place, so we have to look at how we can empower small communities and the residents who live in those communities in order to build power,” says Williams.

When Williams first started working with students, she says they relayed feeling detached from the idea of climate change, which was mentioned as an aside in earth science or biology class. It was taught abstractly, as a scientific phenomenon that is happening — but not to people.

The students said they didn’t realize they could already see the consequences of climate change right outside their windows.

The idea is for students to see climate change as not just an environmental issue, but also one of economic and racial justice. Group leaders are under no impression that policymakers will save them from the devastation of climate change. They are trying to prepare students to save their communities themselves.

Indeed, Taylor notes that “more affluent communities have been working toward sustainability for decades.”

Through their participation in Creek Rangers, students travel to civil rights museums and conferences in between working on local sustainability projects and tackling a bespoke science and technology curriculum. Some participants participate in a larger youth leadership training institute. They’ve attended a National Geographic photo camp focused on how climate change affects Indigenous coastal communities.

“There is also a life-threatening aspect to this,” says Williams. “We’re being hit with tornadoes, the flooding is just unbelievable, and there’s no task force. There’s no action around why is this happening?”

“I feel like some people don’t think it affects them.”

While COVID-19 has confined students around the country to their homes, some Mississippi kids would have likely stayed home in the last few months even without the pandemic. The area has recently faced an onslaught of flooding.

Watkins had long accepted the flooding as an inevitable part of her community. It had happened her whole life, making it so her family couldn’t leave the house after storms to go to the store.

Watkins joined Creek Rangers in 2018 through her grandmother, a local organizer and alderwoman. She says it was eye-opening.

In school, she says, teachers broadly tell students that climate change is “affecting people” all over the globe. But it didn’t feel real, “because those people have nothing to do with you,” says Watkins.

But since joining the program, Watkins has run into community members who don’t share her view. When she’s out in the community working on gardening projects, she’s been questioned about her interest in the group and the realities of climate change.

That started to shift once the group successfully built a system to stem the flooding. The Creek Rangers started to receive more respect after that, she said.

Now, Watkins is working with the group to expand its impact on the community. The Creek Rangers have held workshops with local pastors about the realities of climate change. Residents are starting to realize that some of the respiratory issues they face may be related to the mildew infesting their homes, a result of the constant flooding. But it still doesn’t feel like enough.

The group’s floodwater mitigation project took two years in all.

The first time it stormed after leaders had finished the project’s initial portion, they didn’t know if it would work. The rain pounded down with enormous force. They waited with bated breath to see if their efforts were in vain. They watched as the town’s main street turned into a river.

Then, within a half-hour, the water receded. The system had worked.

“It was relief. It was gratification. We were thankful. And the community, they just … they just felt hope,” says Williams. “They knew that something had happened and something was different in their community now. Now, when it rains, they’re not all panicked.”

But the group’s work has just begun. Adult leaders in ASEEDS have developed a long-term climate resiliency plan for the town. They expect the plan to pass, and they hope it will be a model for small, rural towns across the country.

Before, the town’s residents knew things were happening to them; they just didn’t know why.

“But now our children know why it’s happening,” says Williams. “This is their future.”